Seems like we are going to repeat this mantra in each of our posts. Because we just can't stop emphasizing on the importance of it!

Alright let's have a quick recap. In the last episode, (err..last  post) our own  pet-store application was containerized using Docker. We created the image, spun up a new container and even tested an API.

But we've just scratched the surface... There are a lot of things that we still haven't tackled....Yet.

Consider this. We say that any application can be containerized. But what happens when the application creates files (you know, static files or config files, the usual) Where do these go? And what if we want to access these files?

That's exactly what we're answering in this episode (Post! We meant post). We'll be using our own pet-store docker image that we created in the last post. But in reality you can use any other image. (for e.g. Alpine Linux image will do too simply run docker pull alpine and use that)

Imagine your Docker container to be a small world in itself . Or a separate tiny little computer running on your computer (OS will be more apt over here). And like any other computer (or OS), the container also has it own filesystem. Of sorts...

Remember our onion analogy for Docker containers from our previous post?

In summary, everything in Docker is organized in "layers". Basically, A Docker container is a layer of readable images  or "layers" stacked on top of each other which is defined in a docker file . This is the basis for storage too.

Here, we are exporting the entire filesystem for the container. (ie. the from the root directory) 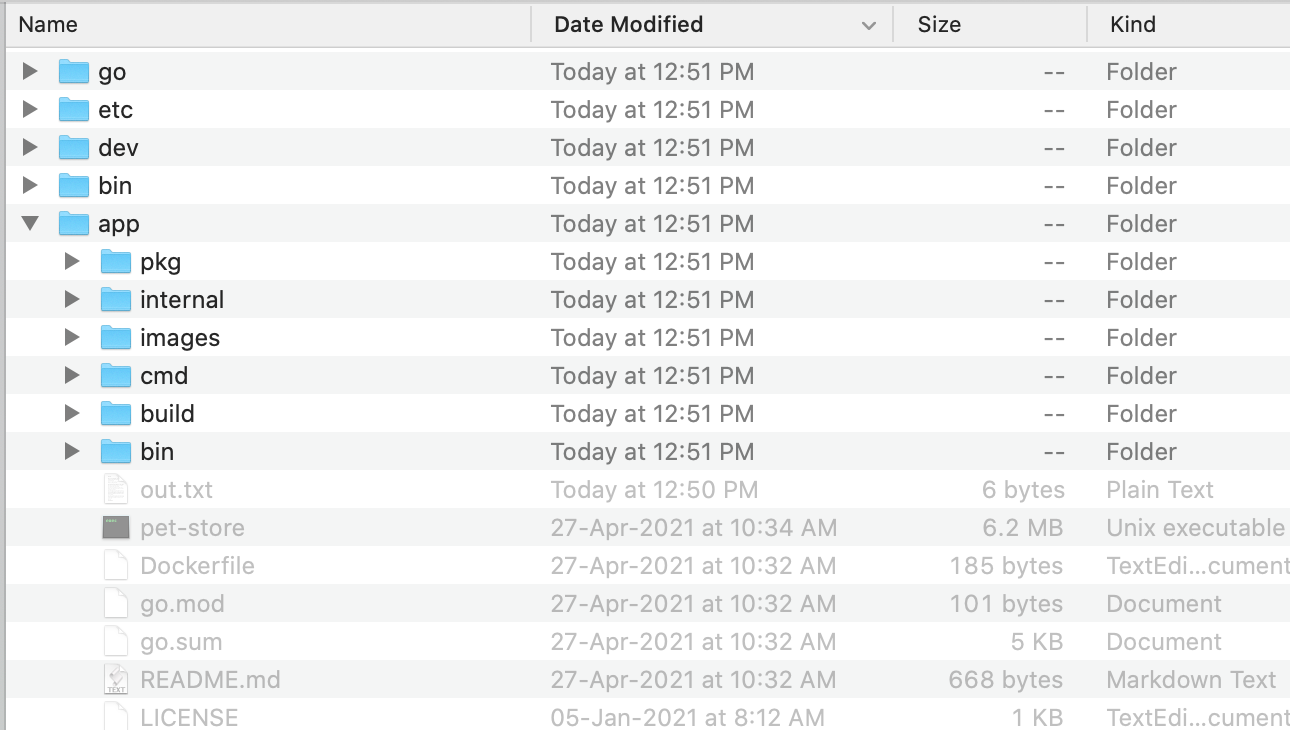 Doesn't it look like any other filesystem on a Linux machine?

This command will take start a new container and open the bash shell in the /app directory, since we had defined our "workdir" as /app in the last post for the petstore image.

When you exit the container by typing the exit command, you won't be able to locate "out.txt". That's because the file was written to the writable layer inside the container and not on the host system.

It can be done of course. Let's find out how.

There are two options to ensure data is persisted on the host even after the container stops; bind-mounts and volumes. Both bind mounts and volumes will allow you to mount any particular directory on the host machine. However, there are subtle differences between the two.

In bind mounts, you can take any directory on the host system and mount it in the containers when it runs.

Bind mounts can be created by using the -v  flag or the --mount flags to docker run.

-v or --volume consists of two fields, separated by a colon (:).

Here, we are mounting the Present Working Directory ("$(pwd)") but you can use any other directory. Just make sure to provide the absolute path though.

--mount  accepts its parameters in the key=value format. It is said to be more verbose and usually is the preferred option.

Whenever we change/update a bit of code in our application we need to rebuild the image all over again which can be time consuming. A quick fix is to use bind mounts  to achieve a "hot reload" feature (of sorts). Simply mount your code repository's root on the container's workdir. For example for our pet store application, we ran the container by

Instead, we add an extra parameter for the bind mount

Now,even if you change your source code, you won't have to rebuild the entire image. Simply restart the container with the bind mount.

Bind Mounts are generally only used during development. One reason is that the bind mount is heavily dependent on the file structure of the host OS and can also be controlled by other processes (other than Docker).

Like in our previous example, even if the "mountHost" directory is being used by the docker container, you can still go and create files on that directory

In such cases, volumes are preferred. Here, the directory to be mounted is created inside Docker's storage directory on the host and is completely managed by Docker. For example in Linux, you'll find the volume under "/var/lib/docker/volumes/".

Volume creation, like bound mounts, can again be done using the -v or --mount although with a few differences

In -v we pass the name of the volume as the first field followed by the path where the file or directory is mounted in the container.

Here the type becomes volume and source becomes the name of the volume.

Another thing about volumes is that you can create them even if you are not mounting them on a container.

And inspect the create volume by executing

Let's try mounting this volume onto our container

To ensure whether the file was persisted, launch a new container. We'll launch one using the Alpine Linux image and use the same volume but mount it on another directory

Now if you list  the contents of "newMountDir", you'll find the out.txt file already there

You can even share data between two running containers using volumes. Remember, volumes are handled completely by Docker and therefore are more secure since no other process can write to these volumes

There! You have successfully used bind mounts and volumes to ensure data persistence for containers. Both of these will allow you to share data between the container and the host. If you use Linux, you can also use a third type called the tmpfs mount which will use the host's memory instead of the container's writable layer. But here too, the data will not be persisted when the container is removed. Kinda misses the purpose for here right?

But we found a little loophole when using volumes or bind volumes this can cause some security issues. Want to know how? Stay tuned for our next post.

Bonus: The Image "Trim Down"

public – 8 min read
Shipping lightweight Docker images to production environments is the standard practice in the industry. But the task of trimming down the image size can be a daunting task. In this post, we find out how images can be trimmed down by using the builder pattern or multi-stage method.
Jun 14, 2021
Vedashree Patil

Part VI : Podman to the Rescue!

public – 8 min read
Podman, a platform which runs and manages rootless containers,adds an additional layer of security over Docker. In this post, we play around with the "docker alias" podman CLI to see if its really rootless.
Jun 2, 2021
Vedashree Patil

Part V: Podman is so "Rootless"!

public – 6 min read
Docker daemon runs with elevated root access which is a security loophole. Rootless containers avoid this by allowing non privileged users to run containers through the use of user namespaces.Podman is one framework that allows running and managing rootless containers.
May 31, 2021
Vedashree Patil